Been too long since I have posted up on my blog here! It has been a really busy year! I got accepted to race on the Isle of Man this year in the Manx GP and it was a hell of a ride! The next couple of blog posts will highlight the adventure and give ya some links to follow for more pics and info.
I flew out of Tucson, AZ on August 10th and landed on the Isle of Man on the 11th, 7 days before the start of the event to collect my racebike from Andy at AGR Motorsport after he had rebuilt my spare engine and got the bike stripped down and reassembled for the fortnight. Also wanted to get there a bit early to get a few laps of the place in to see any changes to the course, big thanks to John Batty as always being there to lend a hand, pick me up from the airport, and put me up while I am there!
We got the canopy sorted and all my crap put in it for the event, grass pits is a bit different than what we are used to over here in the states! Next up was to get signed on and sign my life away so I can go out on the Mountain Course and play!
Then the wait begins, wait for rider briefings, wait for pit lane briefings, wait for newcomer briefings, there is a lot of waiting involved with being able to get out on the roads here. It is totally worth every second of waiting once you get to go out on course, but man have I mentioned there is a lot of waiting?
So after going through all the briefings, signing on, gear check, the fun really begins. Saturday rolls around and it is time to run the bike through scrutineering. Every time before you are allowed on course your bike must go through scrutineering, they check the bike over from front to back, top to bottom looking for anything that could cause a problem on course. I won't go into it too much but they basically give the bike another set of eyes on it which is a great thing for us riders.
Once you get through scrutineering your bike gets held in parc ferme, you put the warmers on and go hurry up and wait to go out. Normally you have a couple of hours from the time you get through scrutineering till your ready to go out so again the waiting...
As a newcomer to the event you are required to do a guided lap behind an instructor and then 5 more laps on your own before you can qualify to race. My lead out instructor was Nige Rea and when we were called up I got in line behind him and we were all chomping at the bit to get out thre. I have stood up on Glencrutchery Road many times but never as a rider, there are a lot of things running through your head before you take that first ride around the place, even if it is a guided lap!
That first lap behind Nige I will never ever forget, the place is sooooo much different when the roads are closed and you can use the entire road. The closing speeds into places are a lot different as well. Had an absolute blast that first lap!
Once we completed that first lap we were held in parc ferme for a bit and then moved up into the pit lane for our first lap on our own. This is a big deal to get unleashed on your own and make your way around the 37.73 mile Mountain Course, there are a lot of firsts here, the speeds take a bit to get used to, the closing speeds take even more to get used to, and your all out there for your first lap on your own with a lot of different levels of riders so it can be a bit interesting to say the least. That tap on the shoulder and your off...
I treated the first lap as a true first lap trying to sort out lines and where to be on course in places at speeds that were way faster than I had ever been around there. A lot of the other riders had different ideas of this first lap and I didn't have as much fun as I would have liked. I got clipped twice with one of them almost taking me out by clipping my front wheel with their rear after going underneath me in an area that I would have never put myself or anyone else at risk like that and then another hitting my right arm hard enough to take it off the bar... I was not impressed at all, I waved some riders by and moved off line at Ginger Hall and just took the rest of the lap to myself and let the chaos unfold. Once I got back we were called into a briefing the following morning that basically said if any of you are caught riding like that again your gone, I think we had 6 riders off that first lap...
All that being said I completed my first lap on my own and we brought it home in one piece. Onward and upward! 2 laps complete, 4 more needed to begin qualifying for the Newcomers and Senior races. Lots more to learn and hoping for good weather for the rest of practice week!
Next blog update will cover the rest of practice week and follow around some of the fun we had on the island this time around! Stay tuned for more!

Ballymoney, Northern Ireland, Joey's Bar and my mind is boggled!

So August 5th rolled around and I jumped on another airplane headed over to Belfast, Northern Ireland to start my "little" trip. My good friend Paul Black who I bought the CBR600RR from that I rode at Kells arrived at the airport to pick me up and we went on a little tour of Northern Ireland. That first day I was just amazed at what I was able to see and experience.
As most of you know Joey Dunlop has been my all time racing hero forever, this trip I was able to have a few pints at his bar in Ballymoney and even got to meet Joey's daughter Donna along with meeting up with Gary again. We also walked through the memorial gardens there celebrating Joey and Robert's wins and lives. Another place we visited that was truly unexpected was a small auto dealership in Ballymoney, Hugh O'Kane Motors. What I was able to see in person there was a real treat, this little dealership was one of the original sponsors of the Armoy Armada, which consisted of Joey Dunlop, Mervyn Robinson, Frank Kennedy, and Jim Dunlop! The memorabilia from days gone by they have is amazing and meeting with them was a humbling experience. Even got to meet up with our bud Tommy Henry for a bit while at O'Kane's shop.
After having some pints and chatting with a bunch of people we headed back towards Belfast with some stops and laps around the Armoy Race Course and a few others and maybe another stop for 1 or maybe 2 more pints before grabbing some grub and out to the paddock to figure out how this Ulster GP was gonna work!
I'll leave ya with some pics from that epic first day, HUGE Thanks to Paul for touring me around! 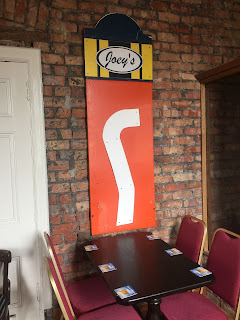 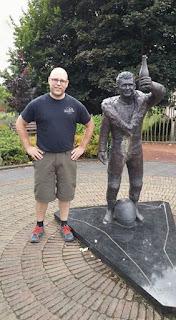 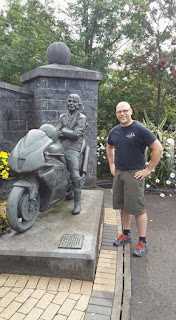 Back from Ireland with a few weeks before heading back over I went racing out at High Plains Raceway with the MRA. With my house being sold it was to be one of my last races in Colorado for some time as well most likely. A good group of people to go racing with and very competitive!
I also brought the wee 125 out for some 2-smokin fun so that was exciting to get back out to HPR where I crashed it last year and broke my wrist, elbow, and got a level 3 AC seperation at the top of the corkscrew... Worked the demons out pretty quickly, so much fun!!!
We switched over to Pirelli tires this weekend and had some feeling issues to work through on the Supertwin but all in all had a decent weekend on it.
The last race of the weekend was on the wee 125 and it was a fun one! I stalled it on the line and was dead last so I had a sprint race of passing people like crazy! Good fun! I missed a 3rd place finish by inches! Damn!
With that I will leave ya with some of my favorite pics from the weekend, was a great weekend and I will miss my racing family from Colorado! Have had a blast with you folks!
Next update will be about the big trip across the pond! Probably going to be multiple blog posts on that one, that's gonna be fun to re live again for the most part! Hope you enjoy it too! 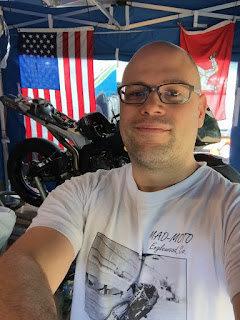 Posted by Unknown at 8:10 PM No comments:

I am really Horrible at this it seems... Catch up and the Kells Road Races...

Yep, I have come to the conclusion I am horrible at blogging... But hey why not keep it going some more here! Okay, where to start... This has been a crazy year to say the least. Racing, I suppose you all want to hear about racing right? I am gonna keep everything pretty short, maybe I can actually keep up with this stuff and keep it interesting for ya!
So lets start out with the Kells Road Races over in Ireland, my first real roads racing experience on a borrowed CBR600RR that I have never ridden before. What can go wrong right? We got to Dublin and our friends Gail and John picked us up to head out to Kells. When we got there Gav Brown already had the pits setup and we were off to the pub for some beers... When in Ireland... :)
So the next day is practice with racing the following day, I took a walk around the course, this was gonna be interesting. Nervous is a word I have used a lot on my adventures, respect is another word that gets used a lot. These are not short circuits with run off everywhere, as I walked around the course I watched the crews putting hay bales around trees, telegraph poles, and stone walls that are right on the edge of the road. Here we go, rolled through scrutineering, got my practice cards, and we were ready for the newcomers laps.
The newcomers laps were very slow and more of a sighting lap session, but showed me that I was in for a ride! Roller Coaster... That's what this is like I think! But your on 2 wheels so it's much better! ;) I practiced and made qualifying for my races, unfortunately the rain came in overnight and flooded the course so the races had to be cancelled... But we got the experience and some seat time with some big boys. So much fun was had and I ended up purchasing the Paul Black Racing CBR600RR off of Paul and Gav for my future rides over there. I can't thank Gail, Gav, Paul, Ryan, Lindsey, Rachel and everyone who helped get Sue and myself to Kells and supported my adventure in real roads racing! So then back home we went, but some fun photos came!
Next up we will be posting some more fun experiences that have been had and I promise that I will post sooner than later! 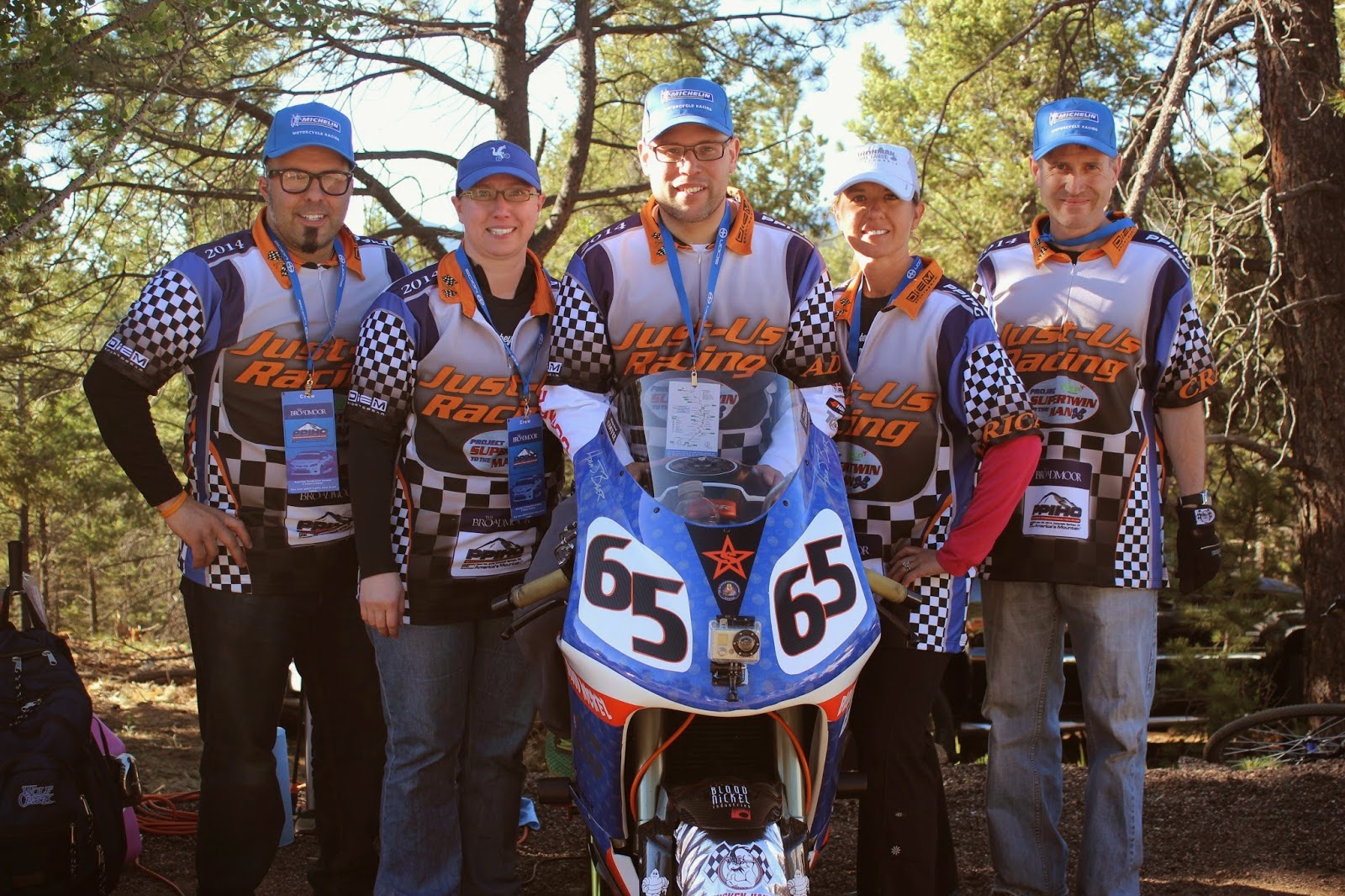 My name is Adam Bauer and I like to go fast on two wheels.